← Back to Production History 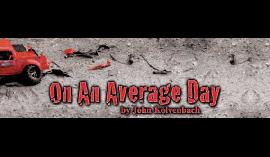 On An Average Day
by John Kolvenbach

“John Kolvenbach’s richly humanistic play about two brothers, one schizophrenic, one “normal,” but both tortured by the aftereffects of their emotionally isolated childhoods, is authoritatively rendered by director Ron Klier and performers Johnny Clark and Stef Tovar, who give performances of virtuostic volatility and depth” —Critics Choice!!!, LA Times (read full review)

“On an Average Day” is an emotionally charged play extraordinarily well acted, monumental in its passion, and mind-boggling in its intensity.  You won’t come away singing its theme song, but you will be left with admiration and wonderment for a play that is beyond awesome.” —CurtainUp.com (read full review)